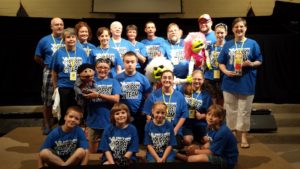 The King’s Kids Puppet Team was founded approximately twenty years ago by then director Martha Evans.  It began with about five puppeteers and over the years has had anywhere from five to seventeen puppeteers at one time, not counting the many adults that have assisted with the team in different capacities.

Our Purpose:  Colossians 3:23-24 states “Whatever you do, work at it with all your heart, as working for the Lord, not for men, since you know that you will receive an inheritance from the Lord as a reward.  It is the Lord Christ you are serving.”  The purpose of the King’s Kid Puppet Team is to minister to people of all ages through drama, music, humor and personal testimony.  The team serves as a witness for Christ, with each person using his or her God-given abilities.

The Puppet Team has had the privilege of reaching out to many over the years traveling around the state of Indiana going as far north as Hammond, and as far south as Sellersburg,   The team has also participated in three mission trips, one to Dayton, OH and two to Tampa, Florida.  The puppets themselves have made two trips to Alaska on mission (escorted by an adult of course). 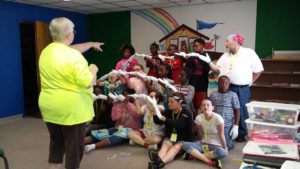 If you like puppets and are interested in being involved, we would love to talk to you about the team!  If you are not interested in being a puppeteer, there are many other areas to help in this ministry, such as prop making, scenery design/painting, costume sewing, doing props during a performance, devotional leader, and others.   To obtain more information about becoming involved in the puppet team ministry, call the church office at 317-342-7585.